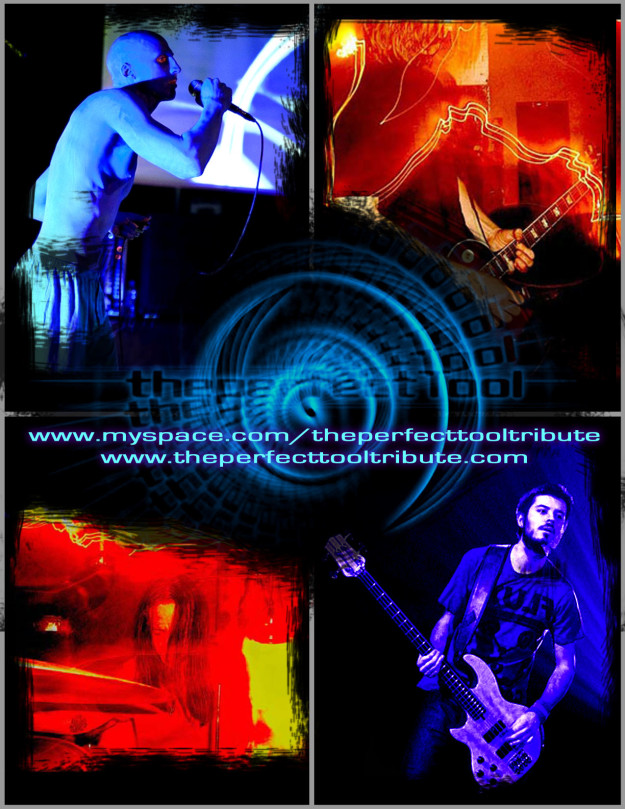 A bit of the story…

In June 1999, drummer Steve Kilroy first started working with guitarist Dave Eve in London with ‘Gods Little Joke’ when he engineered tracks for the 2003 ‘Revolver Records’ release ‘A moment of Clarity’ at Scream Studios in London. Dave co-wrote some of the songs as well as toured with the band and since then, the two have been working together on various projects, producing,writing and touring. Their combined credits are too extensive to list but both have been in signed bands (Steve in Tantric recent 08 tour) and Dave’s resume as producer/engineer is endless and features bands like ‘The Noisettes’, ‘Earodynamics’ and Jules Hodgson of KMFDM. Dave also teaches music theory, does transcriptions and has written music for movies, television, and video game soundtracks. The two went on to join ‘Australian Nirvana’ and after nearly three years of touring they formed ‘The Perfect Tool’.

Obviously, finding a singer for any band is vital for the band’s success, so we set out to find the ‘hands down, OMF’nG, WTF! ‘ guy, and we found him. His name is Mike Rock and rather than attempting to describe what freaked us out when we first saw him,. look at the videos and pics on this page and the feedback from all the new youtube vids and you’ll see for yourself, we really did get the perfect man for the job.

Remi Signorino was seemingly sent from above as when we were on the hunt for a bassist, Steve stumbled upon his youtube channel where he posted most of the Tool bass parts to our existing set,. Even though he is a young guy, his talent and cool demeanor allowed us to set out for tour with just one rehearsal and he was awesome!

When you come to see ‘The Perfect Tool’ you will be transported to a place coveted by hardcore Tool fans! The set list will feature songs from albums past and present, delivered in a powerful, awe inspiring way! In addition, ‘TpT’ has been stunning audiences in Europe and the States with eye-popping production including some amazing video projections.

We encourage everyone to bring their cameras and video phones,. let’s spread the good word through places like youtube and myspace video,. We’d love to see your clip online.