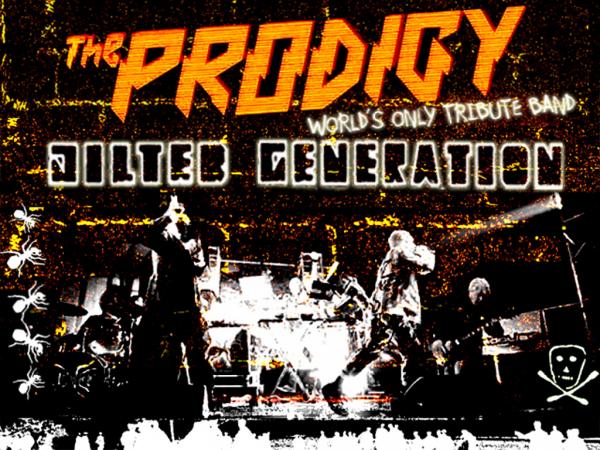 The Jilted Generation: the world’s ONLY Live, full band tribute to The Prodigy!

Since their inception in early 2005, the energy and madness of Jilted Generation has torn up venues and festivals across the UK and Europe. These shows have also seen the band being included on many old skool dance events, including Fantazia, Raindance and Epidemik alsongside such names as Pendulum, Utah Saints, Chicane, Ratpack, Slipmatt (SL2), Dave Pearce, Darren Styles, Andy C, Altern8, Shades Of Rhythm, Micky Finn, Darren Jay, Ratty, Billy Bunter, Sonique, Brandon Bloc, MC Bassman, MC Lenni, MC Charlie B to name just a few. On the regular circuit, Jilted Generation have been included on bills featuring The Womats, Wiley, Ultrabeat, The Yardbirds, The Animals, Bad Company, The Hollies, The Sweet, Bad Manners as well as various well known and loved tribute acts.

The group was created by the meet up of Prodigy superfans Jason Shorthouse and Royle ‘Eddy’ Fitzwilliam. The presence and vocal stylings of Jason play a huge part of the energy of the band in the role of MC ‘Maxim Reality’.

Royle ‘Eddy’ Fitzwilliam plays the role of ‘Keith Flint’ shouting at the crowd, spitting rasping lyrics and feeding off the music like an adrenaline junkie!

The brains of the opperation are provided by local DJ and DnB Producer Mark ‘Sparky’ Hall, who plays the role of Liam Howlett, Using Laptops armed with Ableton Live and a host of real hardware synths to blast out sick, twisted sounds and dropping loops and samples into the live show.

Live drumming duties are carried out by Robin Powers on a wicked, chromed-out drum/pimp kit, with expert timing and amazing skills and stamina! Ladies take note!!!

The main goal of this tribute is to provide the full on Prodigy expereince. To look and sound as authentic as we possibly can, meticulous attention to detail is paid, from costumes to equipment and of course, recreating the music to a note-perfect standard. Like all good tributes, we’ve never been under any illusions that we are the real band, and have a deep respect and appreciation for the original group. We do pride ourselves on going as far as we can towards coming as close as you could ever get, and that’s what every tribute should be! Thousands of happy punters will agree with that! Even former Prodigy live guitarist Gizz Butt said his guest appearances with us were “Like having a flashback!”

We are also currently writing our own stuff, of which two tracks have been professionally recorded. You may hear them cheekily slipped into the live show from time to time!

At a Jilted show, we have the buzz to perform the madness of the tracks, make people lose their minds and not give a fuck…

We just wanna rock it!