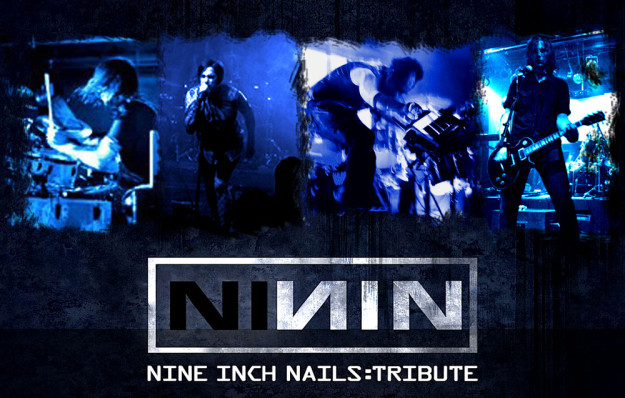 Nine Inch Nails are the most popular industrial group ever and were largely responsible for bringing the genre to a mass audience. They have won Grammy Awards and have reached record sales exceeding over 30 million albums worldwide. If you have ever been lucky enough to see Nine Inch Nails live, you will know that the news report of them ending their touring duties is a sad one.

This is where NININ (Nein ist Nine Inch Nails) tribute bravely step up to the fold. Featuring the powerful voice of Danny Testerman and the mighty keyboards of Alvin Melvin, formally of US touring NIN tribute ‘Mr Self Destruct’, massive unique fx laden guitar tones of Ron Fuzz and unrelenting pounding of Slave, they bring the whole live NIN audio visual experience flying full force to your ears and eyes backed by stunning visuals and the look and feel of a NIN gig.

NININ was formed by Fuzz and Slave in late 2009. They knew that if this tribute was going to work, it had to be the best so the search was on for someone that could fill the gargantuan shoes of Mr. Reznor and a keyboardist that could handle the mind bending array of sonic soundscapes NIN employ live. This took two long hard years of searching and the wait was more than worth it. After the first rehearsal, jaws were hitting the floor as everything effortlessly came together culminating in the successful debut of the band in Texas in early 2011.

The set list is constantly growing and is delivered as authentic versions of the way NIN played the songs live featuring material ranging from the early days of ‘Sin’ and ‘Down In It’ to classics such as ‘Closer’, ‘The Wretched’ and ‘Terrible Lie’ to the modern hit stompers like ‘Discipline’ and ‘We’re In This Together’ ensuring each gig is unique, unruly and unstoppable.

NININ will be bringing the show across the ocean to Europe in march 2012 forging an unmissable experience with immense Tool tribute ‘The Perfect Tool.’