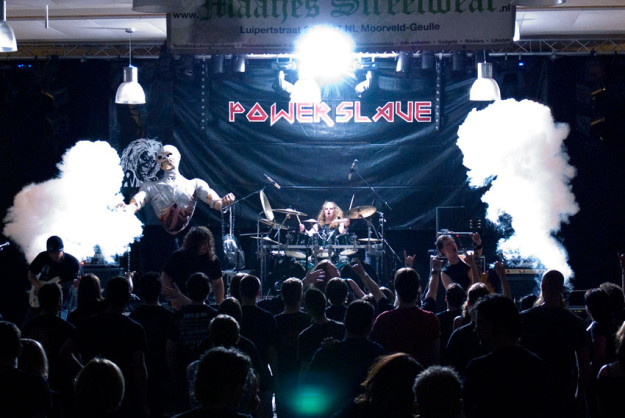 If you think that coverbands are a weak substitute from the original, then you should come and see the Dutch Iron Maiden tribute Powerslave.

When this well oiled machine starts running there is no way of stopping it. The high standard of classic songs like The Number Of The Beast, Run To The Hills, The Trooper, Fear Of The Dark and numerous other songs are a proof that Powerslave knows how to play these Iron Maiden songs.

Powerslave played several larger events: Not only the annual “Sjwaampop” festival in Swalmen, the “Paaspop” festival in Schijndel and the metal temple of the Netherlands: the Dynamo in Eindhoven, but also major venues like 013 Tilburg, Het Paard van Troje during the LEGENDS of ROCK Tribute Tour.

The high voice of Don “the siren too” Feltgens, the dueling guitar parts of Steven “Smith” Wullems and Cyrill “Murray” Wulms, the galloping bass rhythms of Peter “Harris” Rovers and the thundering drum fills of speed wizard Allan “Mc Brain” Gilissen make Powerslave a worthy Iron Maiden tribute. And when Eddie starts wandering around the stage, the Iron Maiden picture is complete.

15 YEARS OF SLAVERY!
In 2012 Powerslave exists for 15 years! Powerslave originally started in 1997 with Paul van der Hulst on vocals, Cyrill Wulms & Steven Wullems on guitar, Ronald Roodbol on bassguitar and Danny Princen on drums.
In 2002, Ronald was replaced by Peter Rovers on bassguitar and in the same year Pieter Paul Jetten took over the drums from Danny. In 2005 Don Feltges replaced Paul for vocals. Finally, in 2006 Allan Gilissen got Piers spot behind the drums.

So if you feel like screaming Iron Maiden songs at the top of your voices, bang your heads to loud music then make sure you visit a Powerslave gig!