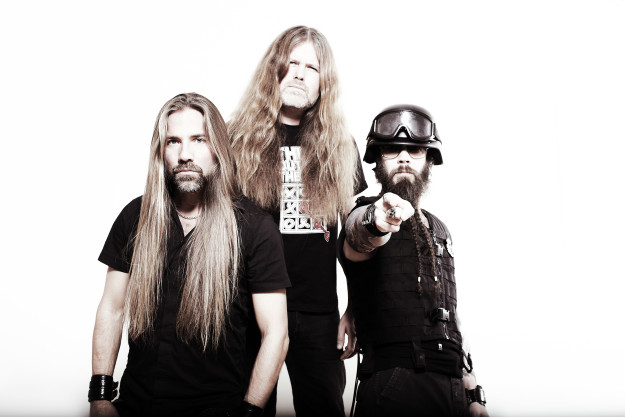 A fairly outrageous Gothenburg hard rock trio, Freak Kitchen were originally thought to be Danish thanks to the involvement of producer/mentor Torben Schmidt of Danish AOR outfit Skagarack and band leader Mattias Eklundh’s previous tenure with Fate. Previous to his involvement with Fate, Eklundh and drummer Joakim Sjöberg had both been members of Swedish outfit Frozen Eyes with whom the duo recorded a series of bizarrely titled demos and an eponymous solitary album in 1988. The band toured in Germany on the back of the release of Appetizer opening for Thunderhead and also Pink Cream 69. The latter match-up being a stint that allegedly influenced the lyrical content of the track “Jerk” found on the group’s sophomore Spanking Hour release.

1997 Eklundh guested on the debut album from fellow Swedes Locomotive Breath and Soilwork as well as Evergrey and guested for German’s Chroming Rose. Eklundh has also issued a 1996 solo album under the pseudonym of Mr. Libido titled Sensually Primitive. The man would also put in a further appearance on Locomotive Breath’s sophomore outing, the 2002 issued Heavy Machinery.

The Freak Kitchen frontman hooked up with former Danger Danger man Andy Timmons plus Tony Hernando and bassist Mike Daane and drummer Dan Wojciechowski for a run of Guitarfest 2003 shows in Spain during September of 2003. During 2004 Mattias Eklundh guested on Christian Rivel of Narnia‘s ambitious epic rock project Audiovision‘s The Calling album.

In a first for the band, Freak Kitchen would be announced as appearing at the Great Indian Rock festival held in New Delhi during February 2006. In outside activity, Eklundh would also feature prominently on the 2006 Planet Alliance album project mentored by guitarist Magnus Karlsson of Last Tribe, Midnight Sun and Starbreaker and Cloudscape vocalist Mike Andersson.

Eklundh would participate in an “all star” performance at the ProgPower event at Earthlink live in Atlanta during September, headed up by noted Norwegian vocalist Jørn Lande, involving Zak Stevens of Circle II Circle and ex-Savatage, Lance King of Pyramaze, Michele Luppi from Vision Divine, Pasi Rantanen of Thunderstone, Mikkel Sandager of Mercenary and Michael Eriksen from Circus Maximus.

In April Matthias Eklundh guested on a guitar solo for a take on Kiss‘ “I Want You” on Electric Earth’s Selling Souls EP.