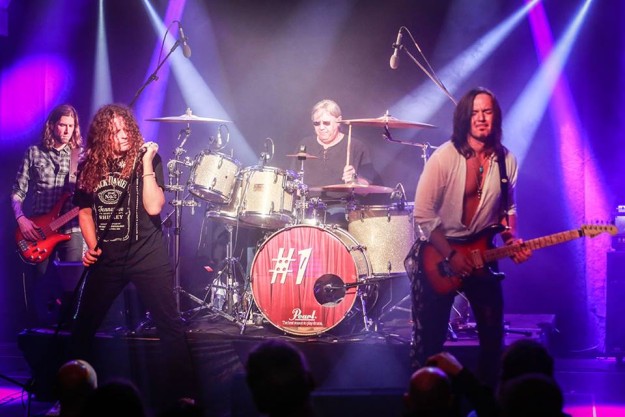 The success Story of Purpendicular is nothing Short of amazing, as in the First Touring year the Band completed a short European Tour with Original Deep Purple Drummer Ian Paice. The First two years the Band completed Shows in mainly Austria & Germany.

In 2010, the Band were Invited to Russia St Petersburg and perform with the Legendary Vocalist of Rainbow, Deep Purple & Yngwie Malmsteen, Joe Lynn Turner.

By the year 2011, The Band underwent a complete revamp, Bringing in Players such as Bernhard Welz on Drums who has Performed with Jon Lord the Concerto For Group & Orchestra in 2009.

This change was mainly due to Tour much more than before and get established in many other Countries.

In Purpendicular Welz is using and sharing the Same Drum Kit and Set up as Ian Paice. Welz had Previously performed with members of Whitesnake, Toto, Deep Purple, Level 42, Pink Floyd & Eric Clapton.

By 2012 the Band embarked on the Official 40th Anniversary Tour of Machine Head which was endorsed by Ian Paice.

On this Tour The Band were Joined by Ian Paice for a few Dates in Switzerland & Germany as well as the Surprise addition of Original Deep Purple Bassist Roger Glover.

This was the very first Deep Purple Tribute that Roger ever Performed with and has stated his Interest to do so again if time allows.

Another major Event for Purpendicular on the Machine Head Tour was the Historic Invite to play in Montreux Switzerland, which is a Town with a Rich and Famous Deep Purple History.

Again this was another feat in which no other Deep Purple Tribute had achieved until now.

Purpendicular now have completed Tours in Countries such as Germany, Austria, Hungary, France, Holland, Switzerland, Russia, Belgium, Denmark,and Croatia with many more Countries to be covered in the near Future.

Purpendicular in 2012 Signed a Major Deal with a Agent in Moscow, opening up Options in all Baltic Countries Starting in 2013 in Russia with 5 big capacity Shows.

In 2013 Purpendicular will Celebrate the 20th Anniversary of the Battle Rages on Tour, which was naturally Ritchie Blackmores last Studio album with the Band!

The Band will Tour Heavily in 2015 with some Guest Star players joining occasionally.

In February 2015 Drummer Bernhard Welz was fired from the Band because of repetitive unprofessionalism on and mainly offstage.